Asta Ödman was born in Gothenburg and was a sculptor and artist.

Ödman studied for Sten Teodorsson and during her studies she became friends with Inger Manne, with whom she painted with for many years.

In the early 1960s, Ödman studied for Fritz Gahn and she was a member of a group of artists who sculpted and painted.

Ödman had a number of own exhibitions. She was also posthumously represented with several works in the Norrköping art museum's compilation exhibition "Female Artists" from 2013.

In Norrköping there are also public works created by Asta Ödman, for example in the town hall and the concert hall De Geerhallen.

Ragni Kjellberg was director of "Magdeburg" (Elementarläroverket for girls) and its principal from 1942 to 1969. She was also president of Fyrisgården and in the Professional Women's Association.

In Kjellberg's memory, a memorial fund was instituted in her name for students with artistic talent.

Anna-Ma Toll studied at the Swedish Social Institute in Stockholm from 1934 to 1936 and was educated at the Red Cross Nursing School from 1936 to 1939.

Between 1941 and 1943 she worked as a curator at the Pension Board's health board in Korseberga and as a hospital counselor at Uppsala University Hospital and was hospital curator there from 1948 to 1953.

Toll participated in the rescue effort in Hungary in 1956 and in Skopje in 1963 and was also employed for a period by Save the Children and was bureau director at SIDA from 1968 to 1980.

Image description: Anna-Ma Toll, circa 1970 from the Wennergren Center in Stockholm with staff from the Population Agency department. Photo: Pelle Stackman / SIDA. [The image is cropped]
Click here for an uncropped image

Ebba Ruzsica Sörbom was born as Ruzsica Schreiber in a Jewish family in Novi Sad, former Yugoslavia. As a child, she spoke German, Hungarian and Serbian.

In 1944, Sörbom was taken to concentration camps where her mother and younger brother were killed in the gas chambers. After all, Sörbom survived Auschwitz and Bergen-Belsen and came to Sweden in 1945.

She studied drama at Uppsala University, worked with drama therapy at Ulleråker Hospital and informed about the Holocaust in schools.

The debut book "Bortom minnet, bortom glömskan" came out in 1988. Ebba Sörbom has, through her poetry, portrayed personal memories of the concentration camps and given voice to the survivors.

Image description : Ebba Sörboms Gravsten. Photo: Henrik Zetterberg. [No photo of Ebba Sörbom found when the page was made]

In 1933 she settled in Uppsala and was very involved in popular education. She also worked with elderly care and patients in psychiatric hospitals. Grieg Cederblad was also a children's book author and lecturer.

Grieg Cederblad was also a translator of Swedish fiction to Norwegian from the time she came to Sweden until the end of the 1940s. She employed by her brother Harald (founder, major shareholder and CEO of Gyldendal Norsk Forlag). She also wrote articles in Alle Kvinners Blad. 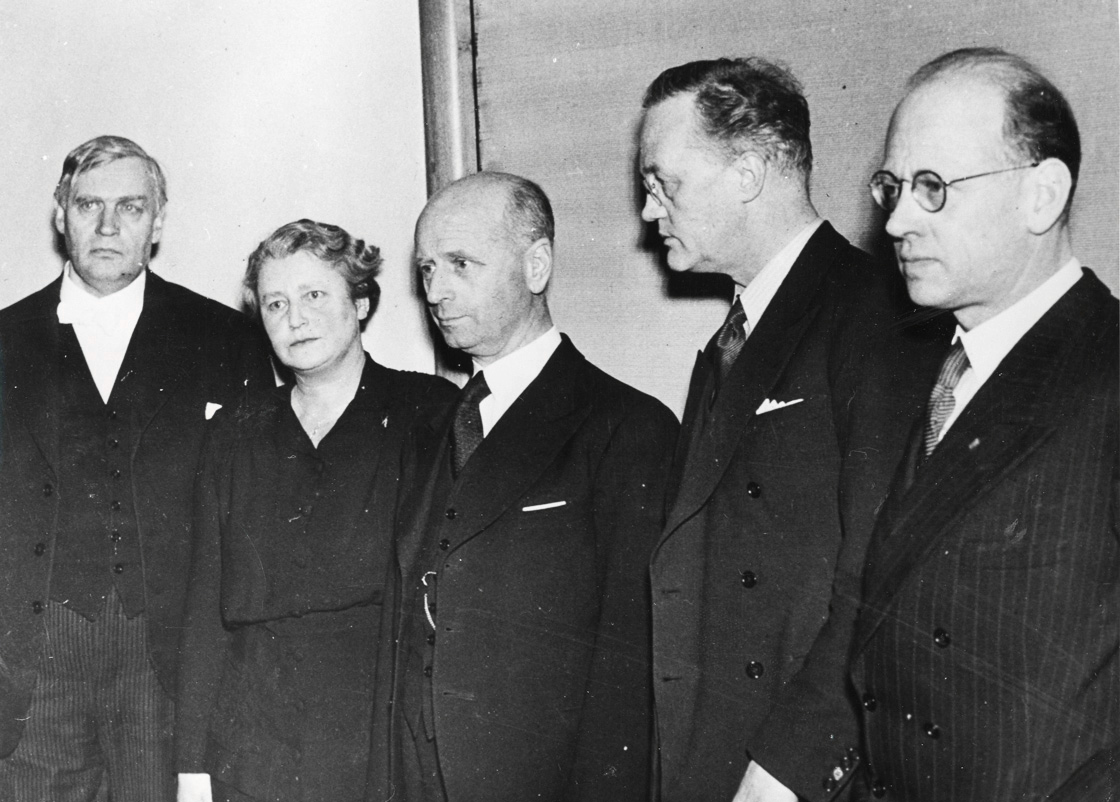 During the war years and during the German occupation of Norway, Grieg Cederblad was very active in the Norway help. In 1946, she was awarded King Haakon VII's Cross of freedom for her work.

Margit Sahlin was one of Sweden's first three female priests and ordained in 1960 when the Swedish church, through a Council decision, let women become priests. A new law was made in 1958 and came into force in 1959.

Prior to that she had acquired a broad academic background and a doctorate in Romance languages about the Church dance and the Folk dance song, La Carole médiévale et ses rapports avec l´Église (the medieval dance and its contact with the church). Already in 1940, she is interdisciplinary in her dissertation.

Sahlin took the initiative to the formation of Katharina foundation and was its director for a total of 34 years. The foundation is described as a meeting place for dialogue between church and society.

Sahlin was secretary of the Swedish Church's central Council in 1945-1970 and was appointed honorary Doctorate of Theology in Uppsala in 1978.

In the 1970s she was also vicar of the Engelbrekt parish in Stockholm. She performed a pioneering work through the formation of the Diocese Women's council around the country and its umbrella organization ecclesiastical Women's Council (today women in the Swedish church). In 1995 she received the Equality Prize from the Minister for Equality Marita Ulvskog.

The Margit Sahlin Academy was established in 2015 and is the platform for exchange of views between science, society, culture, and Church in Margit Sahlin's spirit.

Sonja Lyttkens became in 1956 the second woman in Sweden with a doctorate in mathematics on a doctoral thesis that dealt with harmonic analysis.

In 1963 she became the Country's first lecturer in mathematics, a service she held until 1984. Lyttkens was also involved in the work to improve women's conditions in the academic world.

In addition to her work, Lyttkens devoted herself to watercolor painting and had already had several exhibitions before she retired. Her watercolours are represented at the Swedish public art Agency.

As recently as 1986, Lyttkens published a work: General Tauberian Theorems connected with a Theorem of Korenblum. After retiring, Lyttkens devoted herself entirely to watercolor painting.

Rosalie Olivecrona was one of the pioneers of the Swedish women's movement. As a debater and women's rights fighter, she made considerable efforts.

In 1857 Olivecrona published a number of articles in Aftonbladet under the title "a crying voice in the desert". The articles defended Fredrika Bremer's novel Hertha, which was a post in the debate about the unmarried woman's authority.

Together with Sophie Adlersparre she started the Magazine for the home in 1859 where she published a variety of texts. Internationally, she had several assignments in the growing female public.

Olivecrona had the main responsibility for the exhibition on Women's crafts at the World Exhibition in Vienna in 1873 and had similar assignments in Philadelphia, Paris and Chicago.

Rosalie Olivecronas literary writing began in the 1840s with poems and short stories in the "Gothenburg trade and shipping magazine" under the pseudonym La Straniera. The poetry collection Forest Flowers was published in 1855 and late in the life study Mary Carpenter and her activities (1887) and Scattered sheets (1889).

Jane Miller Thengberg was born in Greenock, Scotland, and after her father's death, her mother with her two children moved back to Sweden.

Miller Thengberg conducted pedagogical studies in Sweden and abroad and taught as a governess in Stockholm 1845-1852. A short time she was also governess in Scotland.

In 1853 she moved to Uppsala where she soon met her future husband, the librarian and teacher at the Cathedral school Pehr Adrian Thengberg.

Miller Thengberg was strongly committed to the issue of girls education. With the support of her husband Adrian Thengberg, P. D. Atterbom, Malla Silfverstolpe and Gunnar Wennerberg, she founded a girls school in 1855 with the name Klosterskolan.

The teaching was conducted in the building on present-day Klostergatan. The school quickly gained a reputation as the best girls' school in the country. The house has its roots in the medieval settlement and is located in the block north of the old monastery area.

When Miller Thengberg was recruited eight years later as director of the Higher educator seminar, with a training school in Stockholm, 130 girls had had time to get schooling in the house.

She was also one of the initiators of the School of Home Economics in Uppsala.