Asta Ödman was born in Gothenburg and was a sculptor and artist.

Ödman studied for Sten Teodorsson and during her studies she became friends with Inger Manne, with whom she painted with for many years.

In the early 1960s, Ödman studied for Fritz Gahn and she was a member of a group of artists who sculpted and painted.

Ödman had a number of own exhibitions. She was also posthumously represented with several works in the Norrköping art museum's compilation exhibition "Female Artists" from 2013.

In Norrköping there are also public works created by Asta Ödman, for example in the town hall and the concert hall De Geerhallen.

Manne (Gustaf Emanuel) Ihran initially took over his father's, tailor Erik Ihran's business in Uppsala, but came through contact with the artists Olof Thunman and Gusten Widerbäck to increasingly take an interest in artistic activities. 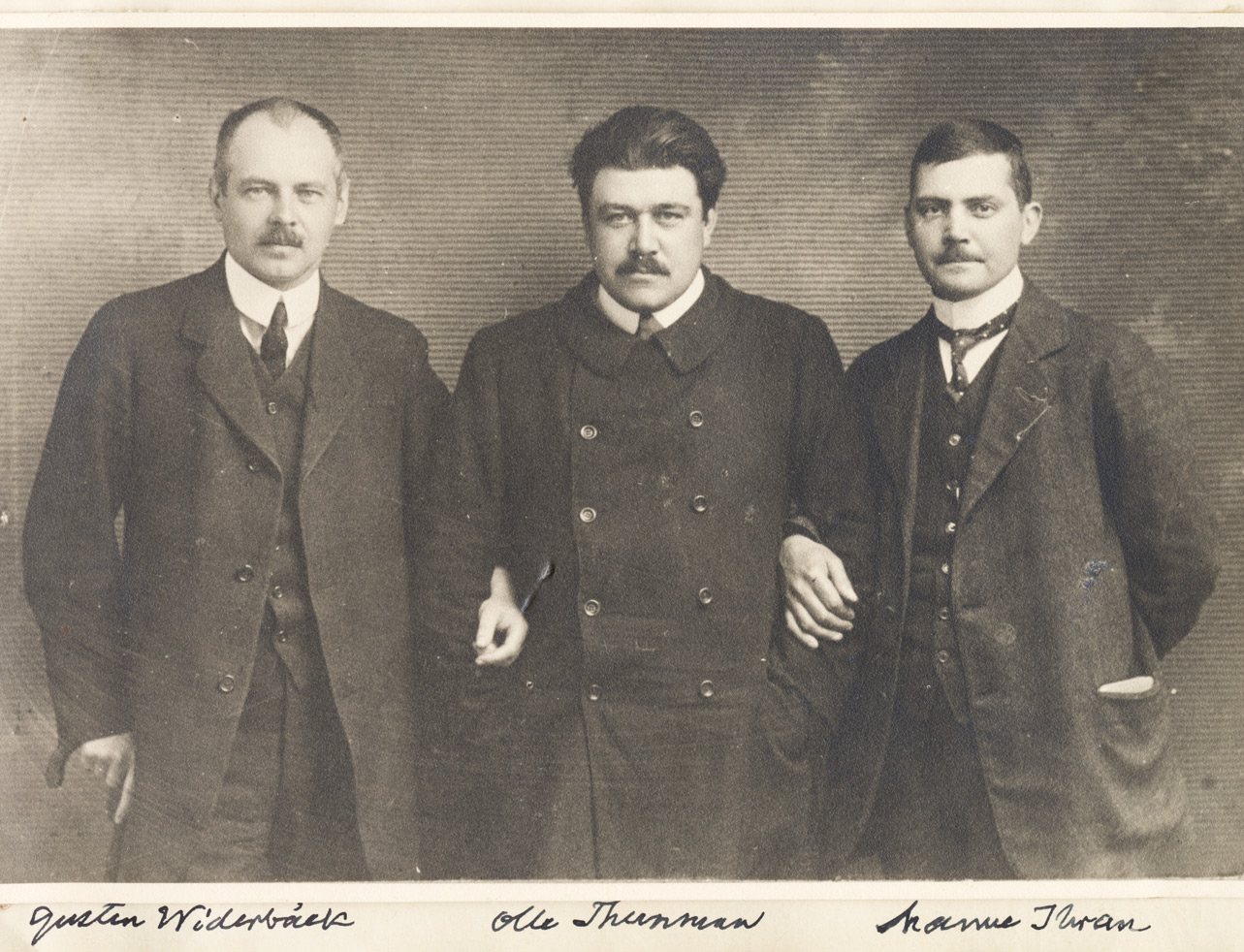 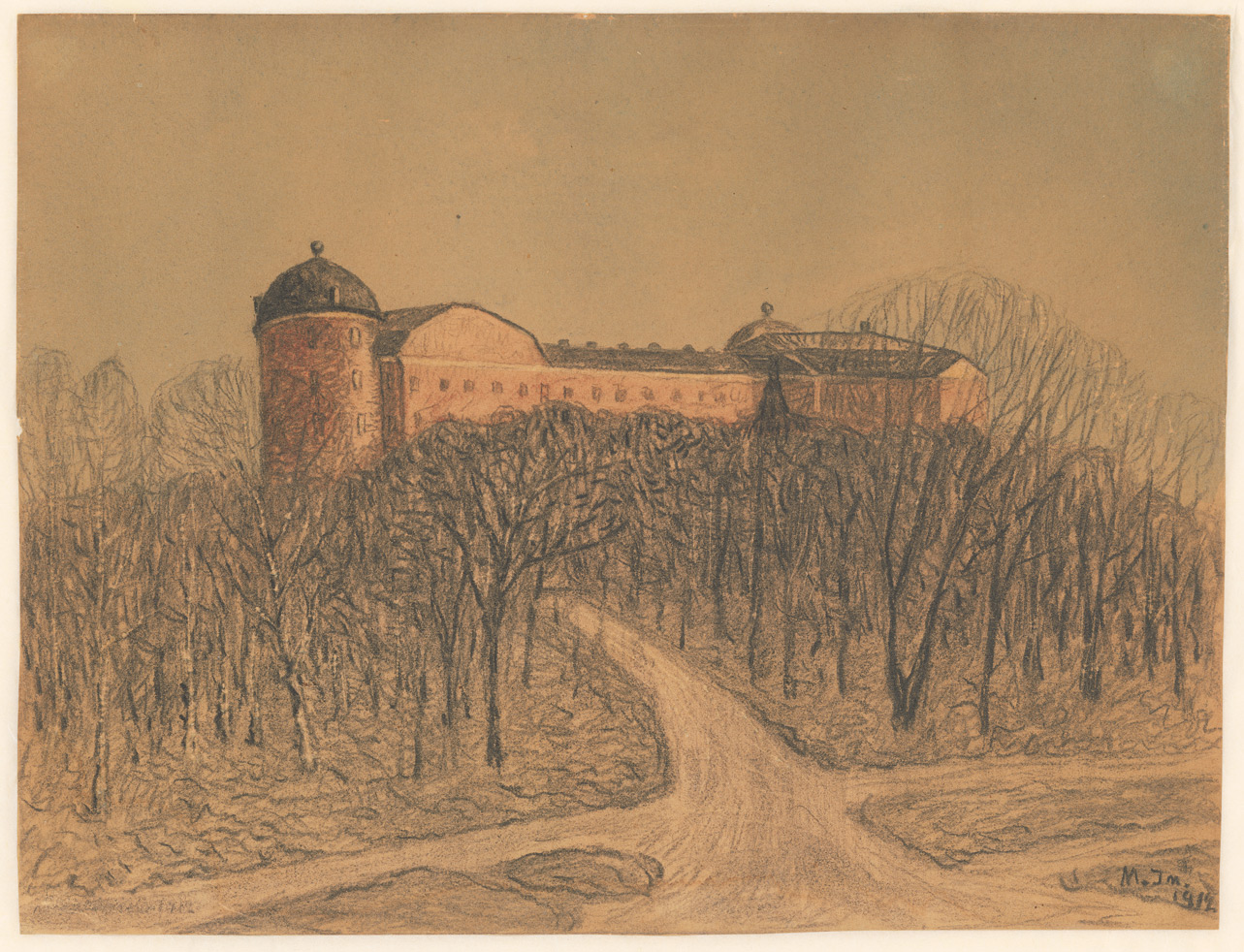 Drawing of Uppsala Castle from 1914 made by Manne Ihran. Photo: UUB.

His circle of motifs is completely bound to Uppsala and its surroundings, such as buildings, backyards, trees and the harbour.

Manne Ihran painted in true national romantic spirit and the mood pictures of Stora Torget with the Svedbergian house from 1905 belong to some of his most famous works.

Rune Hammarling took correspondence courses in drawing and painting and went as an apprentice at restorer Alf Hedman in Gävle where he worked for 17 years.

In 1981 he attended a restorer training in Copenhagen and started his own business two years later.

Hammarling has restored medieval paintings in a number of Upplandic churches and also the 1900-century paintings in Uppsala Cathedral, the University House's Aula, Carolina Rediviva, Geijersgården, as well as a number of student nations and castles in Gävle and Västerås.

Sonja Lyttkens became in 1956 the second woman in Sweden with a doctorate in mathematics on a doctoral thesis that dealt with harmonic analysis.

In 1963 she became the Country's first lecturer in mathematics, a service she held until 1984. Lyttkens was also involved in the work to improve women's conditions in the academic world.

In addition to her work, Lyttkens devoted herself to watercolor painting and had already had several exhibitions before she retired. Her watercolours are represented at the Swedish public art Agency.

As recently as 1986, Lyttkens published a work: General Tauberian Theorems connected with a Theorem of Korenblum. After retiring, Lyttkens devoted herself entirely to watercolor painting.

Emma Schenson was probably the first female photographer in Uppsala and one of the first women in Sweden to photograph professionally.

She was first trained as a watercolour painter, but worked from the 1860s in parallel with both painting and photography. During the childhood of photography it was unusual for women to photograph professionally, but after the regulation for freedom to pursue a trade from 1864, it became possible for women to establish themselves as entrepreneurs and photographers.

Schenson was active in Uppsala from 1860 onwards and had a permanent studio on Östra Ågatan 25. In the Photographic Association, which organized photographers, there were in 1888, three female members of a total of 65. These women were Anna Hwass, Wilhelmina Skogh and Emma Schenson.

During Schenson's productive years, the business card photograph as well as the larger cabinet photograph (format approx. 12 × 16.5 cm) became very popular in all social classes. There are very likely pictures in older Uppsala families performed by her.

During the years 1885-1893, Emma Schenson documented the great restoration of Uppsala Cathedral. Through her images we can follow the restoration from start to finish.

There are currently no negatives preserved from Schenson's photographs, but some photos have been preserved and are available today in the map and picture collections at Uppsala University Library.

There is also an album that shows the cathedral's transformation during the time of the great restoration. Early on, the value of this photographic documentation was realized, which can be seen in an inscription in the Schensons album, which ends "alone in its kind and important for the future". The photographs that are preserved, are a remarkable cultural and historical treasure.

Yngve Svalander studied at the Crafts Society School, Academy of Arts and also abroad. He worked primarily as a draughtsman and graphic artist and was a cartoonist since 1950 for the newspaper Upsala Nya Tidning.

He created "Kajan" (the Jackdaw) which in 1962 began delivering a daily comment on the causerie page. The inspiration came from the jackdaws that flew around the cathedral towers. This bird became the hallmark of the newspaper and was published for more than 24 years, six days a week.

Svalander has also illustrated several books, such as Tore Vretmans Menu (1956) and published the storybook The balloon trip.

Anna-Lisa Thomson studied at the Higher School of Art and Design in Stockholm from 1924 to 1928 and then in Italy, Austria, Prague and Dresden.

Between 1928 – 1933 she worked at S:t Eriks ' factory in Uppsala and designed tea sets in green glazes and ceramic objects with Reliefdekor. In the middle of the 1930 century Thomson came to Upsala Ekeby and worked there all his active life.

Primarily, Thomson created art goods in various ceramic materials with clean, often nature-inspired, decorative elements. Among the most famous works are the Vase Paprika (1948) which was performed in various shapes and sizes and the urn Lancet (1949). Thomson is represented at the National Museum and several other museums.

She also painted, and the works were often nature inspired with motifs from the west Coast where she spent parts of the year. Posthumously, the book echoed by days of Light Timbre (1953) with poems and illustrations by Anna-Lisa Thomson was published.

Eva Edling studied at the Academy of Fine Arts during the years 1900–1905 and also made study trips to Germany and Italy.

She was active in the Swedish Women Artists Association and participated in exhibitions with the association in Stockholm, Lund, Uppsala and Gothenburg.

Edling was a resident of Gropgränd 2, together with her mother and later by herself.

Not far from Gropgränd, lived her brother Nils, in the "Edlingian house" on St. Olof Street 2. There, a number of artists and writers have had their student residences.

Image description: Self-portrait painted by Eva Edling in 1902. Photo: From private collection. [The image is cropped]
Click here for an uncropped image

After studying at the Higher School of Art and the Scuola di Tessitura in Milan, Greta Gahn was the director and artistic director of the hand-work friends from 1931 to 1951.

During the war years and the time thereafter, it was mainly Gahn in collaboration with Alf Munthe who responded for most of the monumental textile art in churches and public buildings.

She was also together with Munthe co-owner of Lekattgården, a workshop for tissue and embroidery. Greta Gahns Artistic judgement and technical know-how was crucial to Munthe's textile works.